Adventures At The Boston Comic Con.

This weekend Zach and I went to Boston with his sister, her husband, my brother and our niece and nephew for the Comic Con. Now, I don't read comics but I thought it would be a nice way to spend time with the family and maybe pick up some Doctor Who stuff.


We went on the Commuter Rail. It took an hour to get there which isn't so bad and they had free wifi, which I was super excited for! 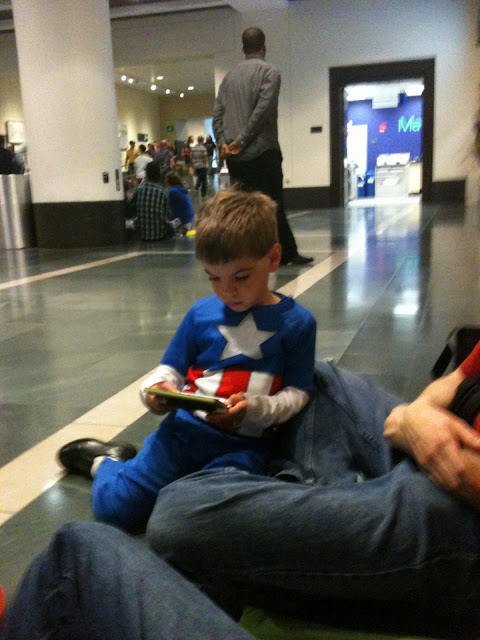 I didn't take many pictures from inside because, well, it looked like this... 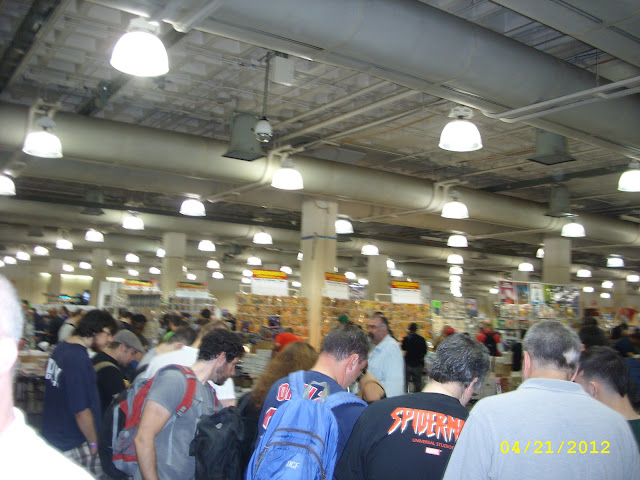 The kids also picked out some super hero glasses and Emily helped them with their choices. 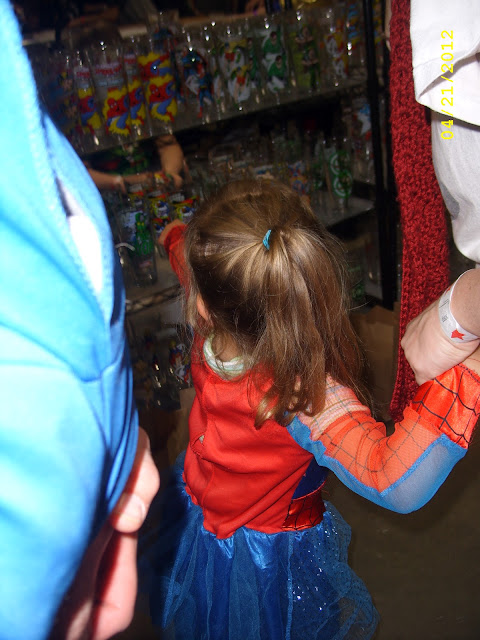 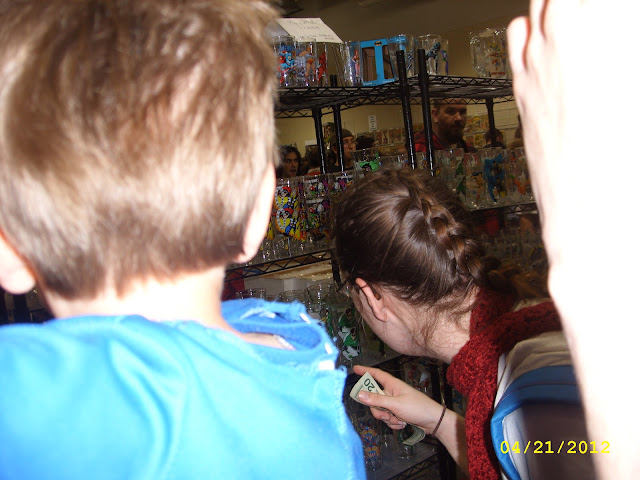 We hung out outside the convention for a while cause of the super packed room. 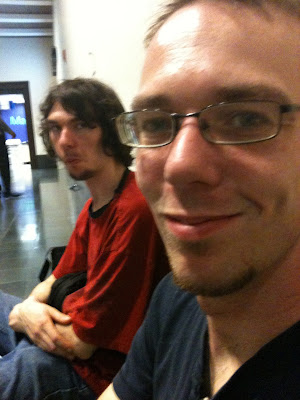 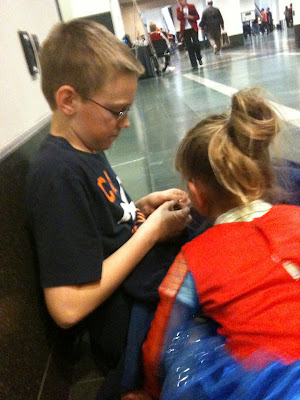 I didn't buy much there but I did pick up this awesome piece of work. 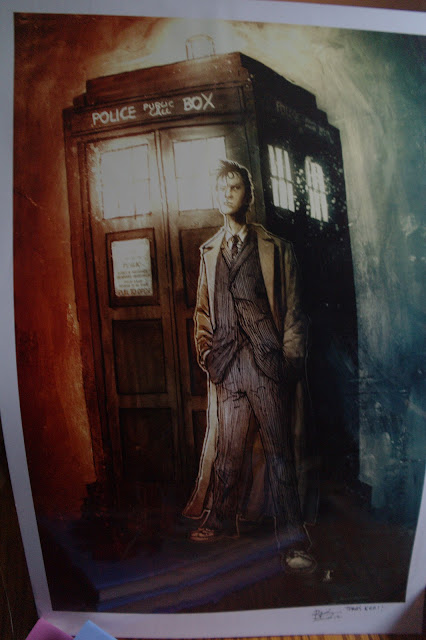 The artist is Ben Templesmith, he drew this for the front cover of a Doctor Who comic. I'm really excited to frame it and put it on my wall. 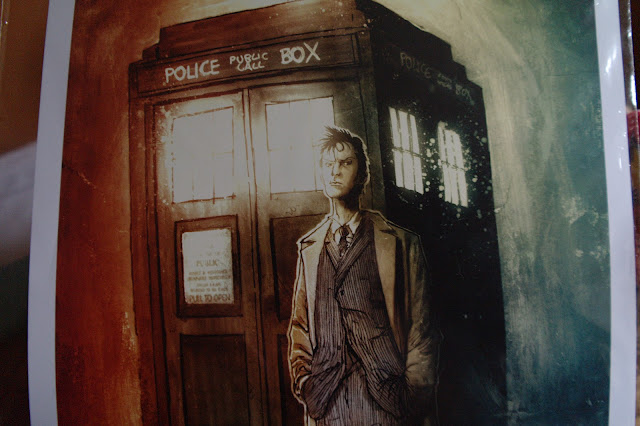 He even signed it to me! 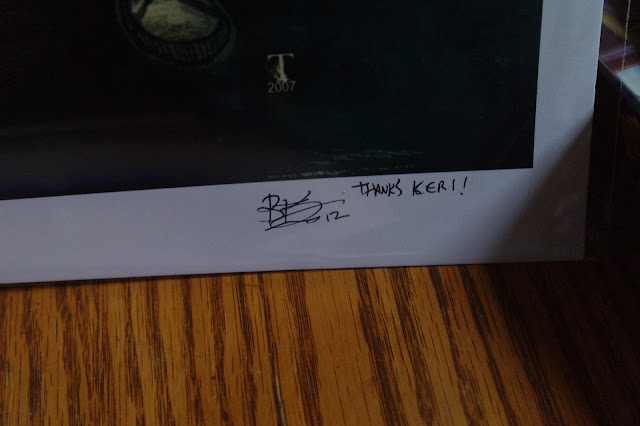 But like a dummy, I forgot his name, so I could credit him for his incredible talent. But my lovely sis-in-law saved my butt and knew who he was. Feeew.. that was close.

This weekend was another first for us. It was Trinity's first night way from us, ever! She slept at Zach's parent's house and had a play date with the other pups there.

Even though it was crowded we had fun together as a family. My niece received tons of compliments on her dress, even one from Batman! Then she asked me, "Is him really Batman?" I told her, no (I know a real let down for a 3 year old) because the real one lives in Gotham City and he needs to stay there to fight crime for everyone. She was satisfied with my answer.

Emily also has her own blog called,  The Absentee Blogger, which is dedicated to her writing work. She will also blogged about our adventure. So, if you want to see more pictures of our trip or if you like young adult fiction stop on by her blog!
Posted by Keri @ Trinitys Love at 6:31 PM 7 comments:

I've decided to do video Friday where I'll be showing videos that I have either taken over the years or recent ones I haven't shown yet. Here is a video from 2009 of my nephew with one of our former kittens Snorkels (whom is Cookie Dough's mom). The dog roaming around in the background is Mr. Goldrush, Zach's golden retriever who passed away shortly after this was taken. Enjoy!

Posted by Keri @ Trinitys Love at 9:50 PM No comments:

We all know Trinity's adorable! So I ask you to take a moment of your time an please head on over to Coast 93.3 and vote for Trinity! Just go to the gallery and put in key word Trinity. Thank you so much!!!

Email ThisBlogThis!Share to TwitterShare to FacebookShare to Pinterest
Labels: Trinity

Have a very Happy Easter to you and your family!

Trinity and I went walking in the woods as we always do. But this time she upgraded to off leash! At first I wasn't sure if I was going to attempt this but I did it as a split second decision. I got out her leash with the rope attached to it and as we walked down to the woods I unclipped it from her harness. I was nervous after doing it but I called her a few times and she came running towards me.
As you know I am very, very nervous about bringing her off leash in the woods. I'm always thinking the worst. Like, what if she goes off the trail? What if she doesn't come back to me and gets lost in the woods? Or, what if she runs into the road when we get close to the car? But I did it anyway. I figure if I continue to do this I will be less and less nervous about the whole thing. It's funny cause it  turns out she already knows that if she can't see me on the path she needs to wait. She kept moving forward then looking back at me the whole time. Of course I needed to capture this wonderful moment on camera (sorry for the crappy Iphone pictures). 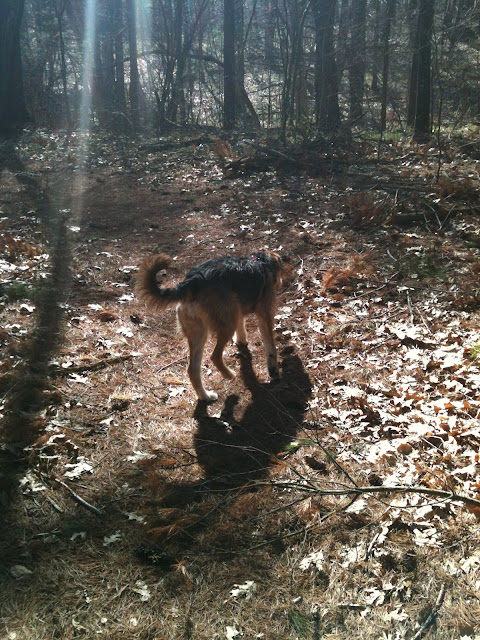 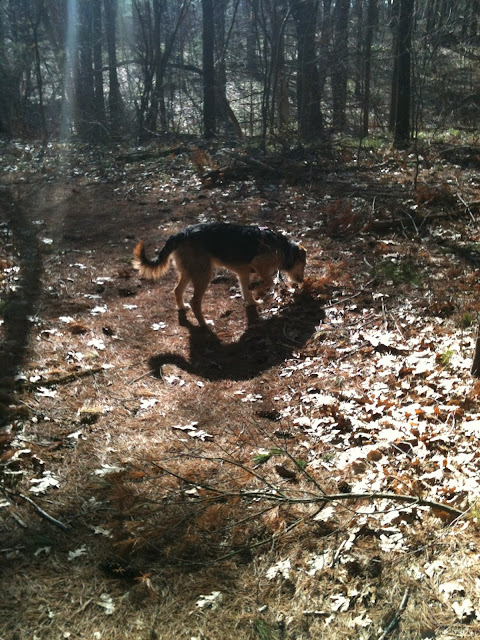 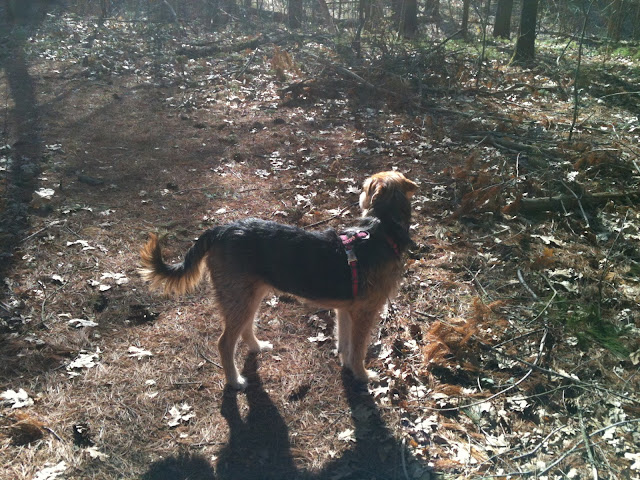 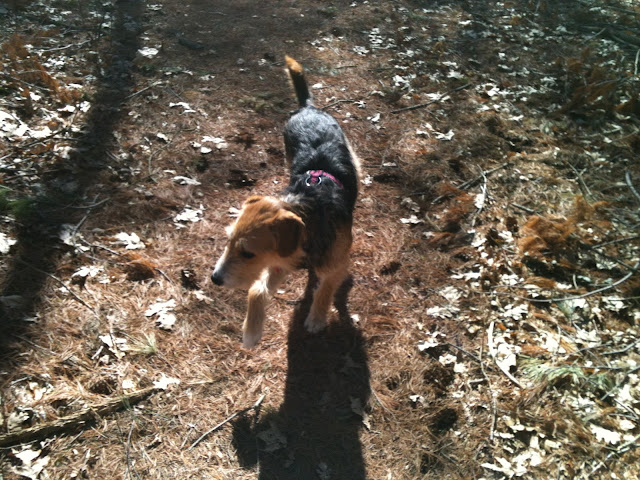 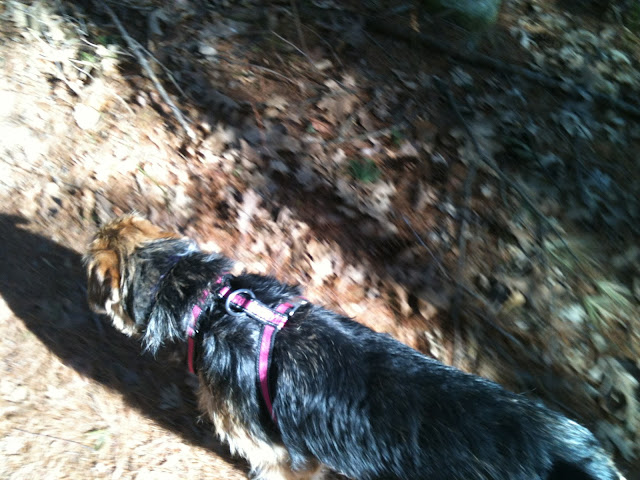 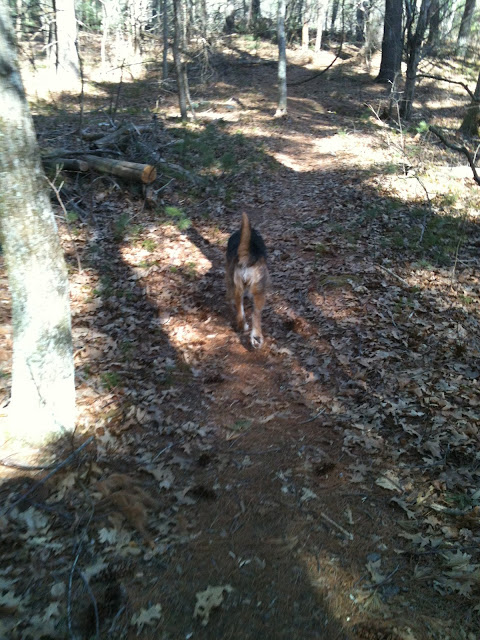 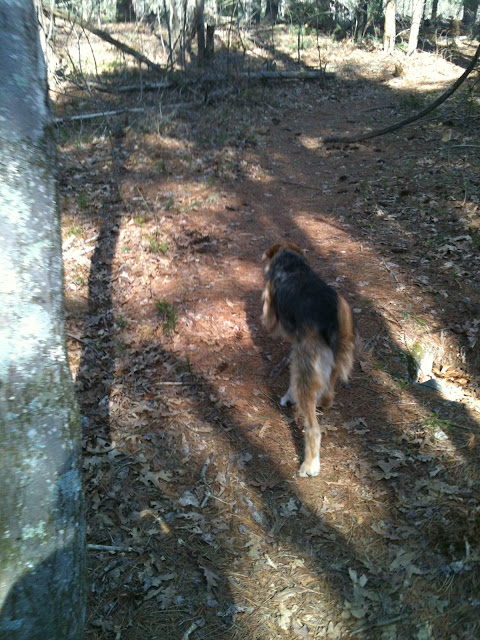 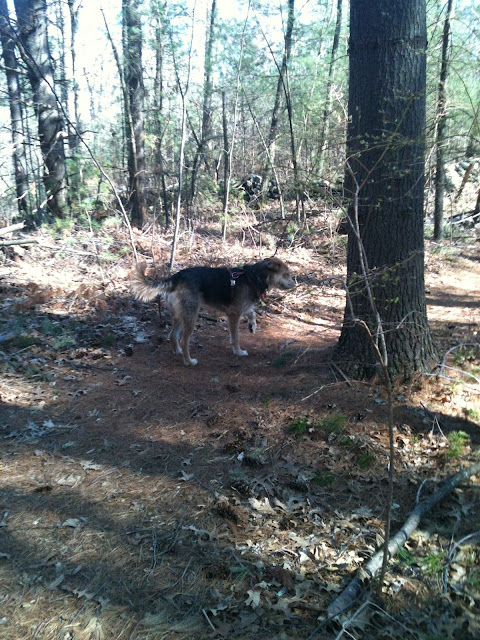 As we neared the end of our walk I called her back to me and put her leash back on. Hopefully she will progress with this and she can be off leash (when we are able to) on all the walks.
Posted by Keri @ Trinitys Love at 4:54 PM 2 comments: 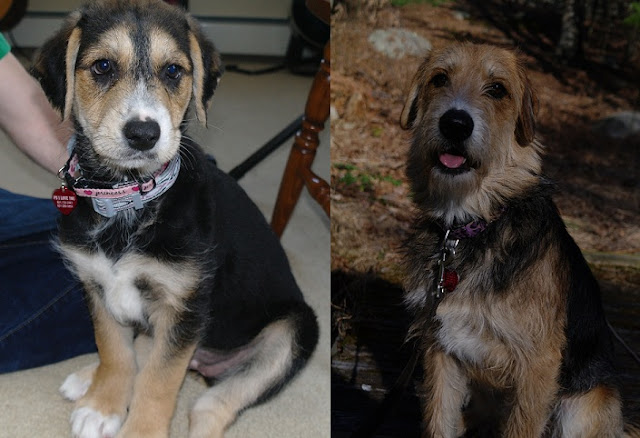 Boy have  things changed!
Posted by Keri @ Trinitys Love at 8:00 AM 3 comments:

I am a person who believes all pets are a part of the family. I call my animals my children, 'the girls' and sometimes I refer to Trinity as 'the baby'. I also believe that, like all children, they need to be raised appropriately. They need to know right from wrong, and for dogs, how to behave politely in public. As the parents we need to teach them this.
When we first adopted Trinity  I was watching a lot of 'The Dog Whisperer' on the National Geographic channel. I was amazed how these dogs reacted to him and the behavioral methods that were done with them. Caesar trains the 'alpha' way and treats dogs as wolves in a pack. I attempted these methods with Trinity and they just did not work. I also re-examined my thoughts on my animals and thought 'if I believe that dogs are a part of our family why am I treating her like a dog'. That may come off as strange to some people, but dogs were trained to work with humans to do human tasks. We breed them to help us do hard tasks to make our daily lives easier and as a result dogs have bonded with us like no other species has. Even monkey's, who are supposed to be our closes species, do not even bond with us the way that dog's do. 'Dog's Decoded' showed us this. I also wanted Trinity to enjoy her training with me and not be scared into doing commands.
I have now gone in a different direction with our training. We are a 'positive training' family, with minimal punishment. She goes in the bathroom for a few seconds (literally) when she's done something wrong, I saw this method on an episode of  'It's me or the dog'. We clicker train and have been doing positive training at Masterpeace. This has advanced our training and she loves positive feed back from us and lots of treats! I have been doing much more bonding with her this way and follow Zak George on You Tube. He has tons of positive training methods that involve bonding with your dog as the primary way to train. I also have subscribed to Pamela Johnson who is also on You Tube. She teaches freestyle methods to have fun with your dog.
I know that everyone has a different way of training. I believe if we can train our dogs with love and bond with them in the process it makes ours and the dogs lives better. But remember training takes time, consistency, patience, and love!

A Dog and Cat's Diary

I recently wrote my interpretation of dogs vs cat. Here is a little bit of humor to go along with my discussion. I hope you enjoy it!!

* Sorry I have removed this picture but trust me it sure was funny*
Posted by Keri @ Trinitys Love at 7:56 PM No comments: 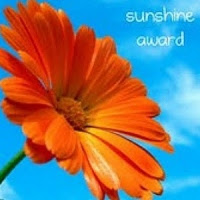